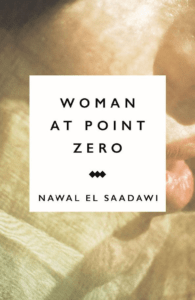 Firdaus is the story of a woman driven by despair to the darkest of ends. This woman, despite her misery and despair, evoked in all those who, like me, witnessed the final moments of her life, a need to challenge and to overcome those forces that deprive human beings of their right to live, to love and to real freedom.”

Woman At Point Zero is a poignant and important story of a woman who dared. The story of Firdaus is a heartbreaking one which transcends from when she was just a little girl to how she became a successful prostitute. Each event as told in this short book showed the conditioning of Firdaus into becoming the woman she grew into.

At a very young age, we see how Firdaus start to experience sexual assault from people she loved and didn’t. As inquisitive as she is, her curiosity does not bring her answers instead she gets circumcised and sold to an abuser. “How was it that she had given birth to me without a father? First she beat me. Then she brought a woman who was carrying a small knife or maybe a razor blade. They cut off a piece of flesh from between my thighs.”

Firdaus falls in love but with no answers to the question of how she could love a woman and different circumstances, it soon fizzles out to Firdaus’s dismay and heartbreak. She experiences love again but soon realizes that gaining power and position seemed more important to her love interest.

This book emphasises on the power of choice for women (which is one of what women ask for in all honesty). Firdaus, seeing that the position of a wife is not one she is comfortable as she had suffered too much as a wife decides that she would rather be a prostitute with power over her own body and decide who will have access to it than be a lowly wife with no say. “That men force women to sell their bodies at a price, and that the lowest paid body is that of a wife.”

This book tells of Firdaus’s rise from timidity and curiosity to courage and Independence; a woman in her own right, holding her head high and commanding presence. She learnt that she can be as wicked as the men she had come across all her life and also wield power in the ways that can suit her too. She learnt of fear, of power and of hypocrisy of the society that wants her ashamed but would take the bountiful money she offers to charity.

Firdaus tells of her freedom in prison and how the singular act of murder of the pimp who makes life difficult for her brings peace to her being.

Some important quotes from the book:

“That is the secret of their continuous attempt to rise to power. They draw a feeling of supremacy from their power over others. It makes them feel victorious rather than defeated. It hides how essentially hollow they are inside, despite the impression of greatness they try to spread around them, which is all they really care for.”

“If the first man who comes along does not want her, she will have the next, or the one after. No need to wait any longer for just one man. No need to be sad when he does not turn up, or to expect anything and suffer when one’s hopes are razed to the ground. She no longer hopes for anything or desires anything. She no longer fears anything, for everything which can hurt her she has already undergone.”

“Everybody has to die, Firdaus. I will die, and you will die.The important thing is how to live until you die.”

This is a truly wonderful book and it deserves to be read by everyone!