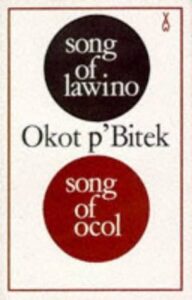 Okot p’Bitek was an Ugandan poet who was born on the 7th of June, 1931. He became known worldwide due to his collection of poems, “Song of Lawino” which was originally written in the Acholi dialect of Southern Luo, translated by the author into English, and published in 1966. On the 20th of July, 1982, he died.

Song of Lawino is a long poem dealing with the tribulations of a rural African wife whose husband has taken up urban life and wishes everything to be westernised.

This long poem talks about how Lawino’s husband took a new wife, Clementine who is educated and behaves European. While polygamy is accepted by the society, Lawino is annoyed that Ocol is shunning her for Clementine and he does not even want to do anything that is related to Africa anymore. He would rather engage in ballroom dances than the ritualistic African dance. This disturbs Lawino a lot and she advises that he stays true to his culture.

I do not understand

The ways of foreigners

But I do not despise their customs.

Why should you despise yours ?

In this same vein and as a reflection of the African society, it is a plea that Africa does not lose her value and stop trading her culture for the westernised, bastardised version.

Lawino talks about the ways of the white people and their manner of dancing, which involves ballroom dancing and pressing their bodies together. She is appalled by this act of theirs and she is naive at the prospect of dancing in that manner, “…I am ignorant of the dances of foreigners…”

She talks about the dances of Acoli people with more respect than she has ever shown to whatever the white people do.

Okot p’Bitek’s writing is quite hilarious and makes use of different figures of speech such as irony, hyperbole, simile, metaphor and many more to pass across the message of keeping Africa’s diverse cultures intact.

There are thirteen poems in this collection and each is easy to read and comprehend.

Yes, if you like poetry that is straightforward, this is for you. It would also do good with opening one’s eyes to see the African continent and her people.