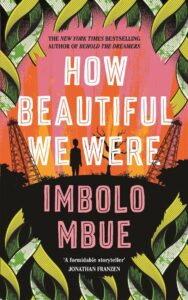 How Beautiful We Were is a captivating story of a fictional African village called Kosawa where the people were thriving and living until an American company “discovered” oil on their lands and started to drill with government backing and no regard for the harm they are causing the people of Kosawa and their children. People soon begin to die from the toxicity in the air and water. Their lands become polluted and infertile. They were being exploited and the different promises made to them were not met, instead, they were harassed, molested and taken advantage of.

“I know nothing about how a girl makes men pay for their crimes, but I have the rest of my life to figure it out.“

How Beautiful We Were shows the issues of environmental racism and how indigenous people are not taken seriously when it comes to land. We find poverty, corruption, greed and irresponsibility on the pages of the book. Postcolonial effects on Africa also is explored.

The book is written in the narrative voices of different people in Kosawa village: The Children served as a collective voice of the children of Kosawa, Bongo, Sahel, Yaya, Juba and Thula whom the story seemed to revolve around at some point.

This book is a slow-burn and a difficult read but the storytelling and multi-narration make up for that. Imbolo takes us through years of hardship faced by the people of Kosawa from generations to generations. It is a mind-opener and a thought-provoking book. It will leave you questioning many things and hopefully will give you answers.

As hope is a dangerous feeling that leaves you tethering and doesn’t mind your fall, so is this book.