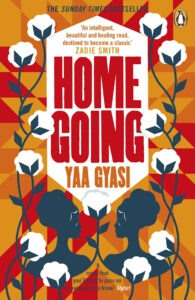 Homegoing is a stunning novel on Black History spanning generations and centuries. It is a profoundly emotional novel where trauma, pain, loss and anger seep through the pages.

The book starts with Effia and moves on to Esi, with each chapter having different takes on the characters from the lineages of Effia and Esi. This fantastic writing style takes us from generations of hurt and slavery and of hope and dreams. Each character is written intimately, making readers feel like they are part of the characters’ lives. We see their struggles, what makes them ache and what makes them beam.

Most importantly, Yaa Gyasi tells the story of Africa through the pages of this book.

“Weakness is treating someone as though they belong to you. Strength is knowing that everyone belongs to themselves.”

“We believe the one who has the power. He is the one who gets to write the story. So when you study history, you just always ask yourself, Whose story am I missing? Whose voice was suppressed so that this voice could come forth? Once you have figured that out, you must find that story too. From there, you begin to get a clearer , yet still imperfect picture.”

There are so many gems like this sprinkled through the book. Homegoing is a powerful book that feels like a mirror to these times.

If you want to learn about Black History, by all means, pick up this book, and you won’t regret it.